A complete decarbonization of the European continent is an inevitable necessity against the background of the Paris Agreement. It provides…

The German Renewable Energy Federation (BEE) welcomes the European Commission’s proposal for a European Climate Law as part of the “European Green Deal”. A complete decarbonization of the European continent is an inevitable necessity against the background of the Paris Agreement. It provides an opportunity to become a global leader in climate protection and at the same time to generate extensive economic added value through technological innovations.

The intention of the proposal is to establish the basis for achieving greenhouse gas neutrality all over Europe by 2050 at the latest. According to the Paris Agreement, 2050 is the year in which greenhouse gas neutrality is to be achieved worldwide. There is a broad scientific consensus that in terms of global climate justice the industrialized countries must achieve this obiective earlier. Considering remaining carbon budgets, the climate law should also create the basis for achieving this objective earlier.

In this context we value the proposal that all legislative proposals should be subject to a “Climate Consistency Assessment” in order to evaluate their conformity with the goal of greenhouse gas neutrality.

However, the proposal lacks ambitious GHG reduction targets for the years 2030 and 2040. Numerous studies show that earlier and more ambitious greenhouse gas reductions are more effective and less costly1. The intention to start the discussion about a higher target for 2030 in the range of 50-55% GHG reduction in autumn and to finally decide only in 2021, shows little ambition and is clearly too late.

Moreover, a strong framework and trajectory for accelerated use of renewable energies in all end-use sectors, for phasing out all fossil fuels and clear incentives for investments in a greenhouse gas-neutral industry are missing. This also includes the objective of no longer importing fossil fuels. The proposal also does not address existing barriers in the area of energy efficiency.

Finally, the proposal lacks a clear framework for binding national targets and milestones for the Member States. Defining the climate neutrality target merely as a collective objective with reporting requirements for the Member States will not be enough to ensure climate neutrality. Therefore, the proposal in its current form does not yet provide an appropriate legal framework for achieving the goals of the Paris Agreement and the decarbonization of the European continent in all sectors.

Challenges and their solutions must be clearly identified

Only a strong definition of climate neutrality can be a suitable basis for creating an appropriate legal framework for the climate neutrality target 2050. This definition needs to build on scientific evidence about the remaining carbon budgets and break them down for each Member State and for each sector. Simply setting an undefined target in the future is not enough. It is very important to consider EU-wide remaining carbon budgets and not to exceed them. However, a clearly defined carbon budget remaining for the EU in terms of global climate justice and in line with the 1.5° C target is not part of the proposal.

In order not to create unfounded expectations for carbon capture technologies, which may be available in the future, the avoidance of GHG emissions must be a priority. The climate law should preferably require avoiding emissions instead of removing them from the atmosphere.

Natural GHG sinks and / or existing or hoped for technologies for separation, storage or processing and use, e.g. by means of CCS, CCU, BECCS or comparable concepts, should only be considered for unavoidable emissions. They cannot be an alternative, but only a supplement to the accelerated expansion of renewable energies.

Based on scientific evidence2 the energy transition will be most effective, if it is decentralized and based on renewable energies and energy efficiency. This approach reduces costs as well as dependencies and should preferably be pursued. A clear commitment is needed that the energy supply must be based on 100 per cent renewable energies by 2050 at the latest. At this point the proposal lacks a clear definition as well.

Appropriate reduction targets and milestones must be established

A linear trajectory with ambitious and binding milestones for the years 2030 and 2040 is fundamental for a successful decarbonization by 2050 at the very latest. The current proposal, however, doesn’t set any specific GHG reduction targets for 2030 and 2040. This is a missed opportunity to create an appropriate framework for an ambitious Green Deal. A binding reduction target of at least 55 percent for 2030 is necessary. Furthermore, the Commission should consider that based on numerous studies, there are already calls for a 65 percent reduction. For the year 2040, a binding reduction target of at least 75 to 80 percent is necessary in order to achieve the goals of the Paris Agreement.

Within the proposal the Commission plans to define a reduction target for the year 2030 after a review of the requirements set out in Article 2 (11) of Regulation (EU) 2018/1999 by September 2020. This timetable leads to urgent decisions being postponed too far into the future.

The proposal does not only lack clear milestones and reduction targets, but also binding targets and milestones for the share of renewable energies in all sectors to underpin the reduction of GHG-emissions. Such goals and milestones must be set both for the European level and for each Member States in order to achieve the necessary full decarbonization.

The lack of concrete and ambitious objectives underestimates the important role, which renewable energies already play in the overall system and will continue to do in the future. As we already suggested in the feedback, which has been submitted during the first round on consultation, shorter intervals of 5 years should be considered for setting GHG reduction targets and milestones.

We welcome the proposal to authorize the Commission to define more ambitious reduction targets by delegated acts after 2030, if this turns out to be necessary for reaching the overall emission reductions targets. In order to achieve the goals of the Paris Agreement it will most likely be necessary to apply this mechanism; therefore, it is important to ensure that it is maintained during the legislative process.

Phasing out of fossil fuels

Unfortunately, the proposal also remains unclear regarding the necessary phase-out from fossil fuels and the change to a system of flexible, decentralized, clean and sustainable renewable energies. The proposal lacks the clear objective of phasing out all remaining direct and indirect subsidies for fossil fuels and a complete phase out of fossil fuel use by 2050 at the latest.

Under no circumstances there should be any measures to promote technologies of capture, storage or processing and use of greenhouse gases, for example in the form of CCS, CCU, BECCS, besides for the compensation of unavoidable CO2 emissions, because they would help to preserve the fossil economy. The EU must legally require that by 2050 no fossil fuels can be used for energy generation. An energy system based on 100 percent renewable energies must be established by 2050 at the latest. Fossil gas could be an interim solution, if this doesn’t lead to investments in new fossil gas projects. This would not be in line with the objectives of the Paris Agreement, nor would it make economic sense, because it would result in additional unsustainable investments that must be written off as "stranded investments". In general, fossil gas as an interim solution must be replaced as soon as possible by green gases that are generated from renewable energies.

In the light of latest studies, current data for fossil gas must be collected and evaluated in the sense of a life cycle assessment and in addition new reference values must be set. A European climate law must clearly formulate the objective of completely replacing the fossil-nuclear energy system. The entire mix of renewable energy sources as well as energy efficiency are available as clean and cost-effective alternatives.

The law must respect the subsidiarity principle as well as the Member States’ right to choose their own energy mix. It must strike the balance between mandatory target achievement and flexibility for member states in choosing their preferred mix of renewable energy, energy efficiency and energy savings. The Commission's proposal is based on the National Energy and Climate Plans (NECPs) provided for in the Governance Regulation. We welcome the planned evaluation of these plans in terms of compatibility and suitability with the objectives of the European Climate Law. Member States should be required to present and regularly update their National Energy and Climate Plans (NECPs). Once established and accepted by the EC, the full implementation of the NECPs – which should be closely linked to the NDCs submitted under the Paris Agreement – should become mandatory and subject to infringement procedures and penalties. The proposed procedure of reports and reviews lone will be ineffective.

It is very important to involve all important actors within the energy industry in the process of establishing and implementing an appropriate legal, regulatory and policy framework for the European Green Deal. Therefore, BEE welcomes the mandatory stakeholder dialogue Member States as foreseen by the European Commission’s proposal for the Climate Law. 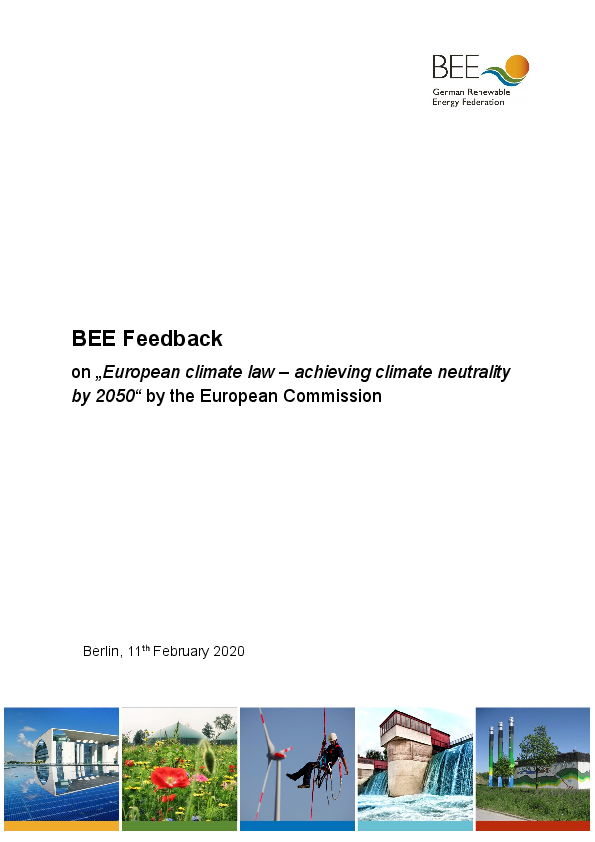 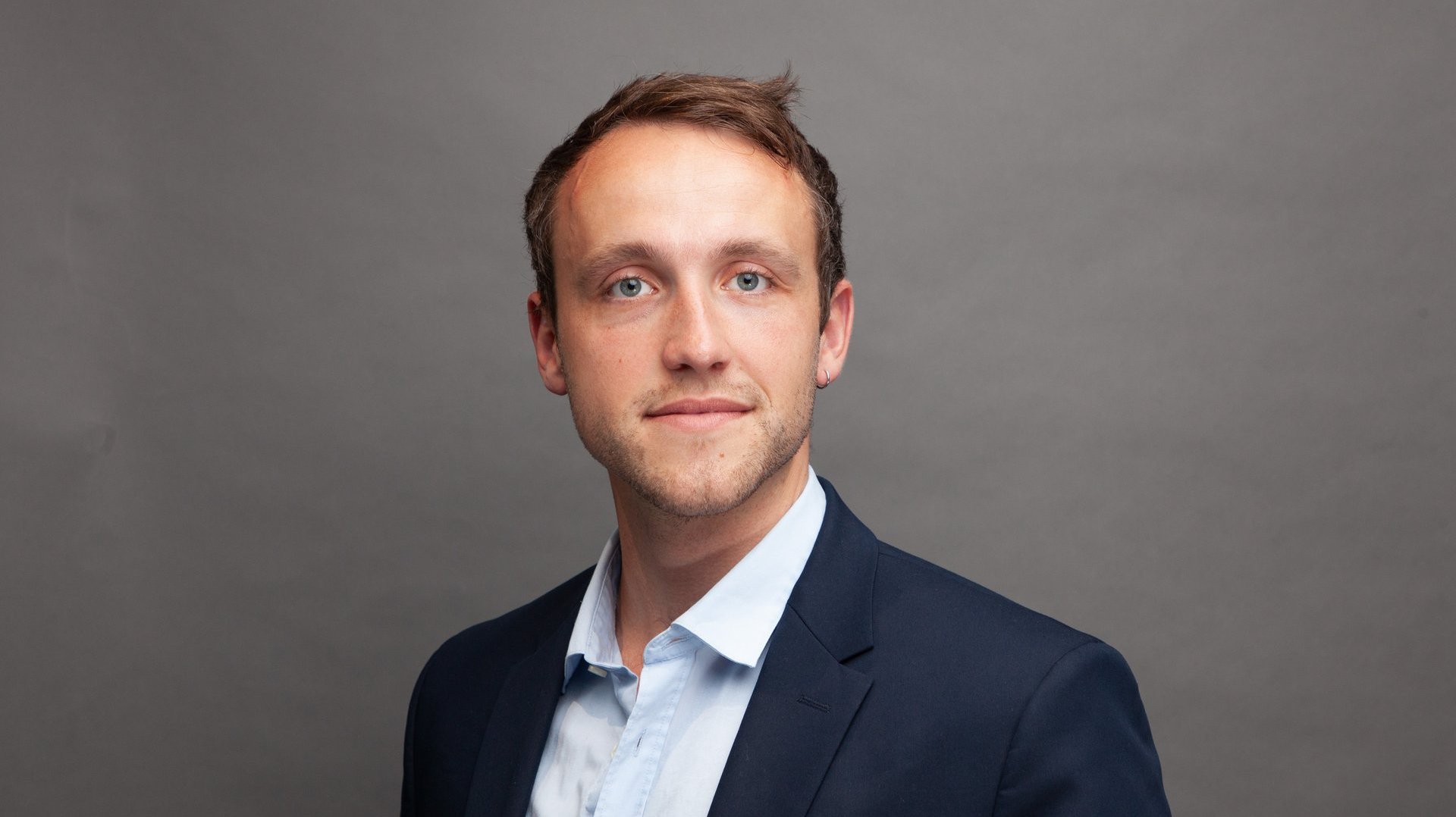 Feedback on Revision of Directive (EU) 2018/2002 on energy efficiency

The German Renewable Energy Federation (BEE) welcomes the COM proposal to reduce GHG emissions by at least 55 percent by 2030.

Statement on “renovation wave initiative” by the European Commission